How efficiently can I learn Sanskrit?

"Language is culture and culture is language". A phrase I heard throughout my history at university. It suggests that understanding a society's language, old or modern, is vital to understanding its culture, and vice versa.

For this reason, in this blog, from my personal experience as a white western yoga student, I am going to argue why learning (the basics of) Sanskrit unlocks deeper levels of understanding AND helps western yoga teachers and practitioners appreciate yoga rather than confiscate it.

Before I became a yoga teacher (perpetual yoga student) at Himalaya Yoga Valley, I studied history. My specialization became the Greco-Roman period. Learning ancient Greek and Latin opened impressive doors to appreciating the life of ancient Greeks and Romans to a much greater extent, as I could better classify their stories, experiences, inventions, etc. No matter how self-critical we are, knowing that our work will always be subjective and biased, the goal of a historian is to approximate historical reality as closely as possible. In my opinion, it is extremely helpful to adopt such an attitude in our daily life on and off the mats. Ultimately, it's strange to teach an ancient science from another culture without understanding that culture on a fundamental (or deeper) level.

Patañjali (note that he is not the only one who writes about yoga!) Wrote in Samadhi Pada:

A common explanation for this sūtra is that someone confuses a coiled rope with a snake. Many yogis also confuse yoga with āsana.

Now what does it all mean when we enter the massive and sometimes confusing domain of yoga? I grew up in a Christian society. Although I do not follow the Christian faith, I am strongly influenced by Christian norms and values. In other words, yogic or rather Indian cultural codes, which are often expressed through language, are foreign to me and largely unknown to me. One of several ways to make what is "strange" or "strange" more "familiar" is to learn India's ancient language: Sanskrit.

Sanskrit can probably be called the language of yoga, as most (not all!) Texts, writings and manuscripts about yoga were written in Sanskrit. Let's use the word Sanskrit to explain parts of Sanskrit!

What does Sanskrit mean? The word Sanskrit, or संस्कृत-, saṃskṛta, consists of two words, saṃ & kṛta. The former means together, good, complete, perfected and the latter stands for made, carried out. Together it means something in the sense of a complete, perfected language.

You are probably wondering why we say Sanskrit / Sanskrita and not saṃskṛta? There are two reasons. First, Sanskrit is a language that values ​​sound, pitch, and intonation.

Because of this, it is understood to be effective, or that the tone and its expression have an effect on the world. This effect can be created through performances, Vedic rituals and especially through recitation. In other words, the pronunciation is important! Therefore, Sanskrit knows several sound classes that sometimes "collide", which is then referred to as sound conjunction (sandhi). In this case a morphological change occurs: saṃ + kṛta becomes Sankrita. This change causes the sound to remain effective and efficient. Otherwise, for example, the reciter will have to switch from tones that are generated in the throat to tones that are generated further forward in the mouth, making it very difficult to keep the flow going. Second, Sankrita was Anglicized to Sanskrit during the colonial period.

Next, let's discuss what is known about the origins of Sanskrit. Warning, some debates are quite heated, political, and potentially provocative. However, I will mention them without participating because I think it is important to be aware of them.

It is undisputed that Sanskrit is one of the oldest, still actively used (!) Languages ​​in the world. It is over 3000 years old. However, its origins are mysterious and highly controversial.

There are two important concepts in cultural anthropology, namely emic and etic approaches. An emic approach is to examine how locals perceive and categorize their world, their cultural codes and rules of conduct on their own terms (internal point of view). An etic approach is the description or analysis of the behavior, rules, etc., of a particular culture by an anthropologist, historian, or scientific observer (external view). As we shall see, these two approaches sometimes collide.

It is traditionally assumed that Sanskrit was divinely "heard" by the Vedic Ṛṣi ("seers") in the Vedas. It is therefore understood as the dēvavāṇī (देववाणी) or the language of the gods, which is eternal and beginningless.

However, scientists from the late 18th century tried to find out where Sanskrit came from because they realized that the language is very closely related to other Indo-European languages ​​- especially its grammatical structure, common verbal roots, and related words (more on that later).

This is also where it becomes problematic and potentially emotionally charged. According to scholars, the earliest Sanskrit speakers (they identified themselves as Aryans (ārya = pure, noble), not to be confused with Nazi Germany) came from outside India, somewhere in today's Iranian-Baltic region. They migrated or invaded (violently), depending on your point of view, down towards the northwest, South Asia or modern Afghanistan and Pakistan. From there they moved to northwest India. For many Indians, this explanation is understandably extremely (politically) problematic, as it would mean that Sanskrit is not native to India, but was brought to India by invaders. Instead, they suggest that Sanskrit originated in India and then migrated and mixed with other languages, hence the similarities. 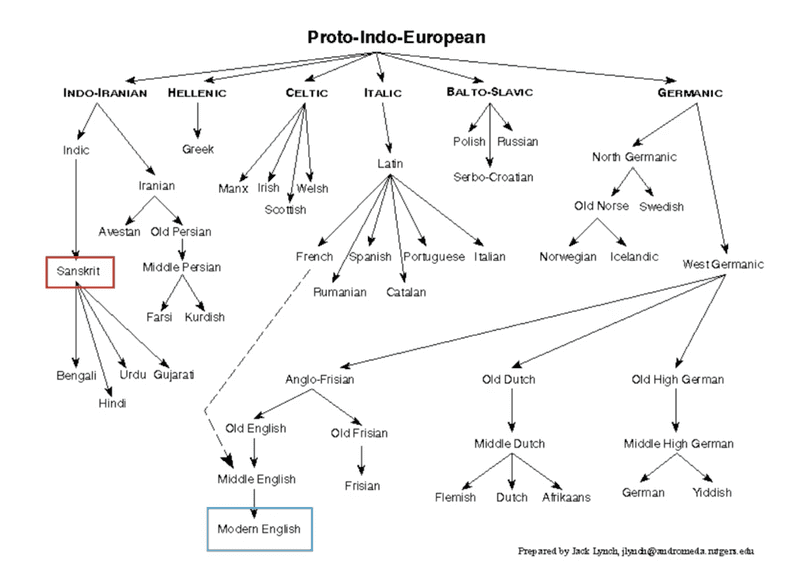 You can see that the Sanskrit words are closely related to Ancient Greek, Latin, and even English! Sanskrit has cases and genders just like German. What is fundamentally different, however, is that these other languages ​​do not seem to have the effective property of influencing the world through sound (Vedic Sanskrit even had certain signs relating to tone or pitch, which were later omitted in classical Sanskrit were).

In summary, most of the texts about yoga are written in Sanskrit. Yogis usually tend to meditate and chant in Sanskrit. The advantage of knowing (the basics) of Sanskrit is to be less dependent on translations, as it is also a question of subjective interpretations. It becomes easier to memorize the names of various āsana and prānāyāmā techniques and provide more and appropriate context for you and your students. Additionally, once you learn how to pronounce the words correctly, chanting becomes a different experience (yes, chanting sounds a little different in North and South India), which gives Sanskrit a chance to take effect again. Even the well-known sacred syllable 'Om' / 'Aum' has a lot more to offer than meets the eye! In addition, studying Sanskrit makes the roots and culture of yoga more accessible and less "unfamiliar". In this way, as white western yogis, we learn to appreciate yoga rather than confiscate it.