What does the Naga Bandham mantra do

If you can't open the door: the mysterious 7th vaulted chamber remains closed ... 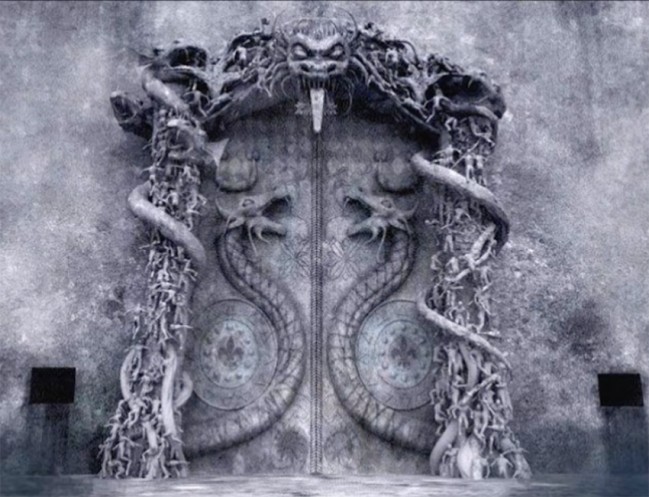 (According to Forbes and other sources, this picture is supposed to be the original "B")

There is no question that the Maharajas of Travancore had diligently amassed fortunes over generations. Secret chambers of the ornate Padmanabhaswamy Temple in the middle of Trivandrum, the capital of the southern Indian state of Kerala, were opened by the Supreme Court of India (consisting of a seven-member judge committee in the presence of the main trustee of the Travencore Trust) in 2011. But was that all ...?

A treasure worth billions of dollars (worth around 15-22 billion dollars / the exact figures and estimates are still not made available to the public today) - consisting of high-quality gold, diamond jewelry, golden utensils, weapons, came to light 6 to 8 meters below the earth , golden idols, golden elephants and diamond necklaces. Overall, it weighs 500 kilograms, including bags full of golden coins from various nations, including Napoleons and Italian coins. Apparently it was the greatest treasure ever found.

The treasure from the vaulted chambers 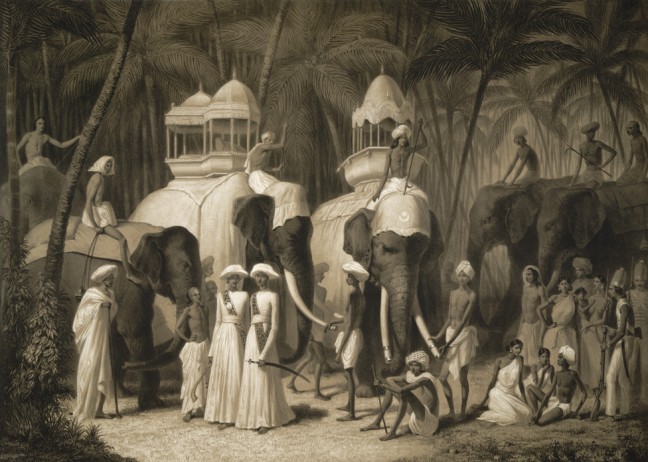 Lithograph of the Raja of Travancore with his elephants in Trivandrum, Kerala, by L.H. de Rudder (1807-1881) after an original drawing dated May 1841 by Prince Aleksandr Mikhailovich Saltuikov, published in 1848.

The temple's administrative authorities were aware of the existence of six vaults. They are located very near the center of the temple on its western side - below where the deity is placed. For documentation purposes, these vaults have been referred to as Vaults A, B, C, D, E and F.

Two more vaults were then identified, categorized as Vaults G and H. Four vaults C, D, E and F are in the care of the temple priests and were opened at least eight times a year. The content that is / was in it has so far been routinely used in special ceremonies anyway.

In the summer of 2011, the court officers opened vault A. They unlocked an iron grille and a heavy wooden door, then removed a granite floor slab. Below - about five or six paces away - a corridor led to a small, dark room that kept the treasure. The various objects were scattered everywhere, they were not arranged systematically. There were baskets, earthenware pots, copper pots, all of which contained valuable objects. It took about 12 days to get the treasure outside and do an inventory.

The secret of the vaulted chamber B

The vault chamber B has not been accessible for centuries. The committee appointed by the Supreme Court opened the metal mesh door of Vault B and discovered a sturdy wooden door behind it. They opened this door too and discovered a third iron door that was blocked. Before the team decided to move on, however, officials initially hesitated and thought it more sensible to hire a locksmith. However, before it could do its work in July 2016, the royal family issued an injunction against the project through the Supreme Court.
Vaults G and H remain closed for centuries, but were not opened until the end of the 19th century and also contained valuables that were already documented at that time.

The open sesame of the mysterious door 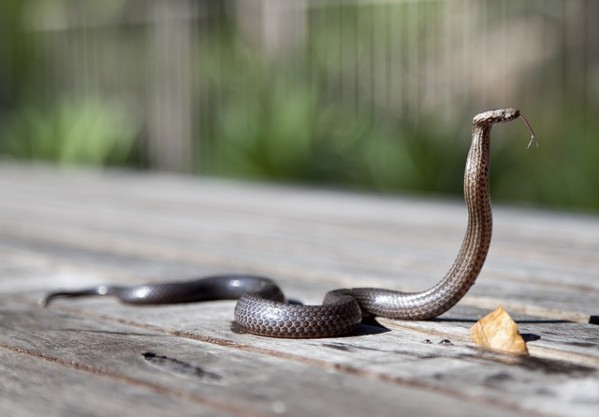 Danger of a cobra invasion? What awaits the "illegitimate" door opener from No. 7?

The whole world is now eagerly waiting to find out what's behind the door. According to experts, the door should open automatically when a secret and properly voiced chant is heard. It is believed that the door was locked this way too.

The chamber is widely considered to be extremely mysterious, sacred, and dangerous according to trust members and astrologers. There are 2 large cobras on the steel door of Chamber B. The door has no nuts, bolts or locks on the outside. It's just a simple piece of steel.

According to Hindu tradition, a snake incantation ("Naga Bandhnam") in combination with the voice frequency of an authoritative person (the so-called "Siddha Purushas" - from the retinue of King Marthandavarma in the 16th century) triggered the closure of the gate.

The gate to such a vault should therefore only be opened by a highly learned "sadhus" who is familiar with "Naga Bandhnam". He has to chant a very sacred and difficult "Gaduda Mantra".

According to legends, violent opening of the gate, which was conjured up with a "Naga Bandhnam", leads to inevitable catastrophes all over the world.

Vedic astrologers from India seem to have already tried to open the gate. However, her "Gaduda Mantra" apparently fell on deaf ears. When properly chanted by a sadhu, the mantra opens automatically and without human effort. Apparently the "Gaduda Mantra" also has the power to move dangerous snakes out of the way.

According to observers, noises can be heard from water or snakes. To this day, however, nobody knows what exactly is behind the vaulted gate.

Hesitant approach - bad experiences from the past century? 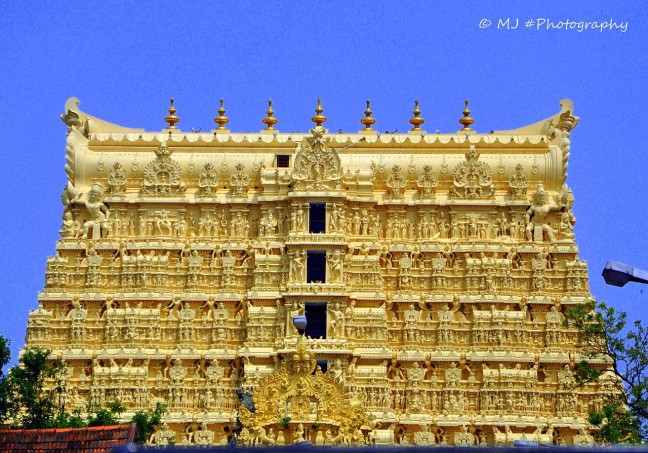 The author Emily Gilchrist Hatch has apparently already dealt with this mystery in the 1930s and describes in her book "Travancore: A guide book for the visitor" (Oxford University Press, 1933) that both 1908 and 1933 were unsuccessful attempt has been made to open a vaulted chamber (s). (>> source)

At 10:00 am on Sunday, December 6, 1931, temple officials opened one of the vaults. Using special religious rites, the key was inserted into the old and rusty locks. Even the Maharaja "Sree Chithira Thirunal Balarama Varma" lent a hand. However, you didn’t make great progress back then.

Apparently, an attempt previously failed because numerous cobras attacked the intruders. This is said to have happened as early as 1908, after which a certain vault (vault B?) Was no longer entered. The question arises as to how these cobras are supposed to have taken care of themselves over the centuries or whether they were not even fed.

How is the treasure supposed to have entered the temple unobserved? 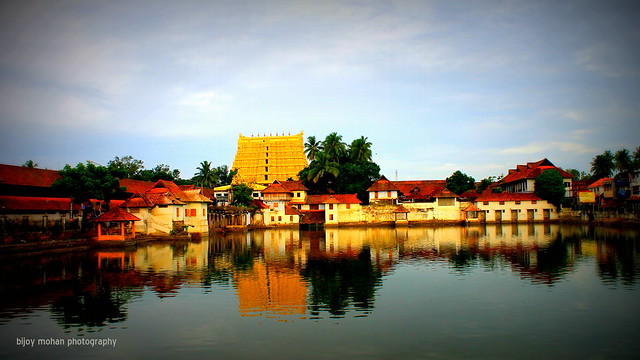 Possibly the answer is hidden in a subterranean passage system that connects the individual chambers with the still unopened chamber or at least chamber B (if it is the chamber with the cobras). It would be the only way to put such a large fortune in the chambers of the temple unseen.

In any case, one thing is certain:

A temple that is under observation by millions of people cannot have been supplied with such treasures without being able to be observed through the official temple entrances.
In addition, the big question arises:

How can such a great treasure have remained hidden for so many years without attracting attention until 1931?
How can the king have housed such treasures without being recorded or mentioned in ancient scriptures?
How did it come about that the temple remained undamaged during the English occupation?
Vault B is the greatest secret that has yet to be revealed. If there are really cobras in it, there must be more space and adequate conditions for cobras to survive there. Food and water should get into it.

That brings the tunnel into conversation again, which leads there and can come from anywhere: from a fort, a forest or the like. But probably not a place that is currently inhabited by people and would otherwise have long been discovered.
After so many years, the tunnel may be destroyed or in dire condition.
If one cannot break the spell of the "Naga Bandham" and resort to mechanical methods, one would have to weld the door with its seamless iron fastenings. Apparently one is still cautious in this regard. Or is it all just a measure to deceive the public?

However, there may also be a water breakthrough below the temple, because a water flow may accumulate there, which then breaks through and causes the temple to collapse. There seem to be no limits to the imagination in this regard.

The mysterious disappearance of the great treasure 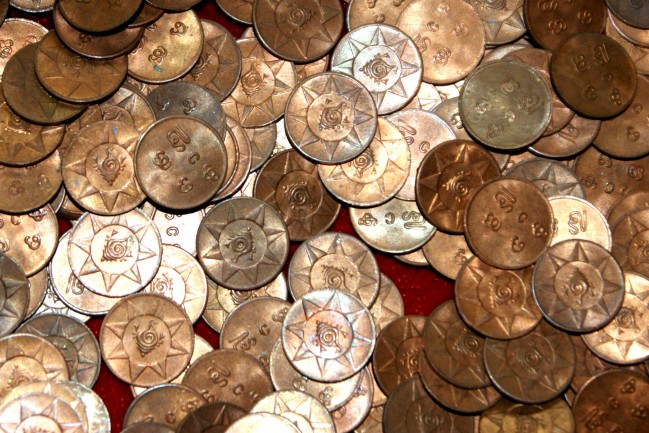 According to the >> India Times, an audit carried out at the Padmanabhaswamy Temple has shown that a massive amount of gold, which has been kept under "guard" since its discovery in 2011, has apparently mysteriously disappeared. Up to 769 gold pots and silver bars have meanwhile been reported missing. Some skeptics also speculate that there is a hidden tunnel under the chamber that allows architects to lock the doors from the inside, making them impossible to break open from the outside. This secret tunnel could inevitably have led to many years of the treasure trove being looted without anyone noticing. One may wonder why this treasure has been stored there since it was discovered.

One may also be surprised that there are still no photos of the alleged treasure. Do you want to make the dealings easier for the stolen goods later on? (* Irony off *).