Every smartphone camera has a bezel

Like every digital camera, a smartphone camera consists of a lens and a sensor housed in a housing.

Some smartphones have two lenses. The flat housing limits the number of possible lens focal lengths. Telephoto lenses with longer focal lengths would protrude far. Interchangeable lenses could change that. 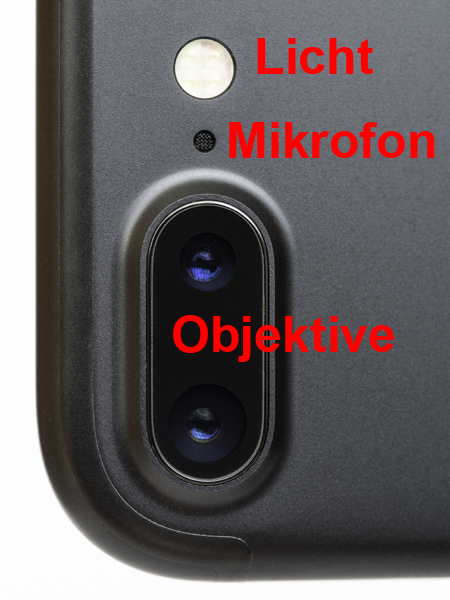 Illustration of the lenses of a smartphone camera. This smartphone has two lenses on the opposite side of the display: a wide-angle (4 mm 28 mm for full format) and a normal lens with a slight tendency towards telephoto (6.6 mm ∼ 57 mm for full format). When the brightness is low, the light illuminates the subject for setting the autofocus or as a "flash light". The microphone is activated when recording video.

Optics / attachments / attachments that are clamped in front of the lens expand it, for example, to a macro lens, telephoto lens or super wide-angle lens. The image quality is more or less reduced, depending on the quality of the intent.

Zooming ("bringing in") is done by using the longer focal length lens, if available and supported by the camera app, usually by enlarging a sensor section. The closer you zoom in, the worse the image quality. I don't use this function because I can do that afterwards with an image editing program as well.

Smartphone sensors are typically small, for example 1/3 ″ (4.8 mm × 3.6 mm). That is why they are noisy even at relatively low ISO values. In addition, the depth of field is very large due to the short focal lengths of the lens.

Smartphones are not so suitable for taking pictures in low light, nor for cropping subjects due to the shallow depth of field.

Most of the time, smartphones save JPEG images. Some can save the raw sensor data, for example in DNG format.

The exposure is controlled by changing the ISO value and shutter speed. You can also install apertures and thus also control the exposure and depth of field. This is not recommended for the small sensors, since the diffraction would presumably reduce the sharpness of the image at the next smaller aperture.

Camera apps allow you to correct the exposure controlled by the automatic exposure, which makes the image lighter or darker. 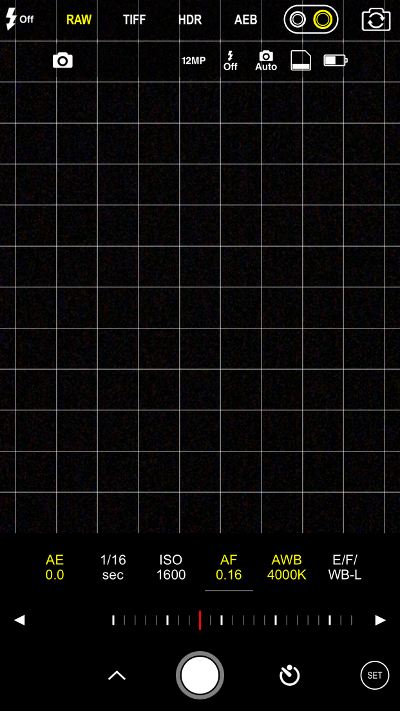 Illustration of the camera app. This camera app lets above Switch the "flash light" on and off (switched off here), select the file format (RAW), set the recording options (HDR, bracketing, deactivated here) and select the lens (wide angle is used). Below can be set: exposure compensation (none), shutter speed (1/16 second), ISO (1,600), autofocus (manual), white balance (automatic). The grid helps to align the camera horizontally to the horizon or perpendicular to verticals such as building edges. The big white filled circle below is the trigger. The self-timer can be activated to the right.

Take photos with your smartphone

The smartphone case was not designed for photography. It's very flat, so it's a bit shaky in your hands. If the lenses are not placed in the middle of the housing, but rather on the edge, your own fingers will easily protrude into the picture. The trigger is not in a favorable position: Either a button on the housing is used, which is more or less awkward to reach, since it is not designed as a trigger, or it is pressed on a point on the display, which also requires more or less contortions if When holding the smartphone, make sure that it wobbles as little as possible and that no finger is allowed to get in front of the lens.

When I release, I put my upper arms against my body, inhale calmly and release just before I've finished exhaling. If possible, I place the edge of the housing somewhere, for example on a table, a railing or a wall. The smartphone can be attached to a tripod using a clamp with a tripod thread. This enables long shutter speeds without blurring. In this case, I release the self-timer so that the vibrations caused by the tapping have subsided until the shutter opens. An alternative is triggering via a cable, for example by pressing a button on the headphone cable. 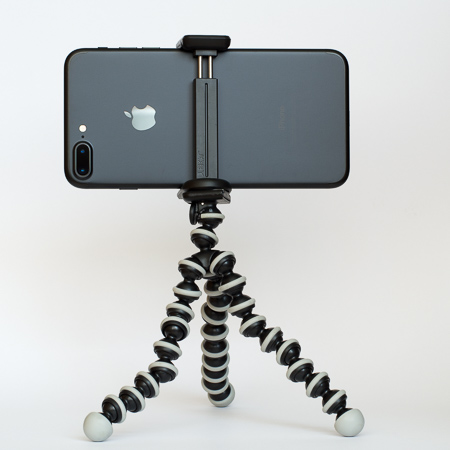 Figure: Holder / clamp with tripod thread for smartphones. The smartphone can be attached to a tripod using a holder, a clamp. Here it was screwed onto a small, light and flexible pocket tripod.

Does a smartphone replace a dedicated camera?

By "dedicated" I mean that the camera is designed exclusively for the purpose of taking photos and is therefore optimally designed for it. In the following I will refer to the dedicated camera as a camera.

For reasons of ergonomics alone, the smartphone is not a substitute. I find taking photos with the smartphone comparatively very cumbersome and uncomfortable. It is a multi-purpose device and cannot be optimally designed for all purposes unless it can change its size, shape and "conjure up" controls.

A camera sits comfortably in the hand thanks to its housing shape. All components - knobs, wheels, buttons, levers - are designed for the purpose of photography. Trigger and other controls can be easily felt and adjusted. I can set the desired aperture / shutter speed / ISO using separate wheels and buttons. For example, if I want to change the shutter speed, I turn a handy wheel that I feel with my thumb without looking, as it is in a position where the thumb can feel and grip it well as soon as the camera is in my hand. Thanks to the swiveling LC displays, I can optimally align the camera to the subject and look at the picture without twisting my body.

With a smartphone, practically everything is controlled via the touch screen. I cannot feel any camera adjustment elements. I have to memorize various typing and swiping gestures that have different effects in a different context. It can happen that I accidentally touch a spot on the display, which feels the same everywhere, and unintentionally move the camera. The trigger can be placed on a button. This was designed for a different purpose, for example to adjust the loudspeaker volume, and is therefore not necessarily in an ergonomically favorable position. The thin case is difficult to keep still. So that I can look at the subject optimally, I would have to hold the smartphone in front of my eyes with outstretched hands. Longer shutter speeds blur. If I do not photograph something at eye level, the picture cannot be seen clearly - usually because it is not possible to hold the camera steady with outstretched arms in front of the face.

The image sharpness of good smartphone cameras is sufficient for enlargements to A3, as long as photos were taken with a few ISO, i.e. in bright daylight. From ISO 200 the sensor noises clearly. ISO 200 delivers minimal noise with conventional cameras. The smartphone lenses cannot achieve the quality of very good photo lenses.

There are subjects that require high-speed telephoto lenses or super wide-angle lenses. The smartphone is no substitute for this either.

There are still more to be mentioned where you will only be satisfied with a suitable camera, such as sports shots in which the autofocus has to follow fast-moving subjects. The examples mentioned should suffice to make it clear that a smartphone camera does not generally replace a camera. If one were to install larger sensors and interchangeable lenses, this would be at the expense of the other ergonomics of a smartphone, without the ergonomics of a camera being achieved.

Since with the angle of view of a smartphone camera - a slight wide angle - many good pictures are still possible, it could serve as a substitute for those who only need this angle of view and usually take pictures in daylight.