What do Muslims think about ISKCON?

In Cologne's largest shopping street, visitors are amazed. You see women dressed in saris, men with shaven heads and a brightly decorated carriage on which there is an image of the Hindu god Vishnu, who is also called Jagannath or Krishna. The deity is dragged through the streets by its followers at the Ratha Yatra, the chariot festival. The procession is accompanied by drummers and repeatedly by the Sanskrit mantra chant "Hare Krishna, Hare, Hare Hare Rama ....". The inhabitants of the multicultural city of Cologne are open to the Ratha Yatra festival and the religions of the Indian subcontinent: "We need more spirituality in this world," says a visitor to the Wagenfest.

The members of the "Hare Krishna Movement" also want to achieve more spirituality. This religion is a branch of Hinduism in which the Hindu god Krishna is worshiped. It was founded by the Indian Abhay Charan Bhaktivedanta Swami Prabhupda in 1966 and came to Europe from the USA. The official name for the movement is "International Society for Krishna-Consciousness", or ISKCON for short. At that time, one saw the followers, wrapped in orange robes and shaven, often in shopping streets. Singing and drumming they tried to recruit members. Nowadays they tend to be withdrawn. Experts assume that ISKCON has over 400 full members in Germany, but significantly more sympathizers. The full members live in temples and have to obey strict rules. Kemal Ajlan, who calls himself Keshava, is President of the Gauradesh Temple in Cologne and explains that chanting, for example, singing and meditating together, starts at half past four in the morning and lasts until nine. 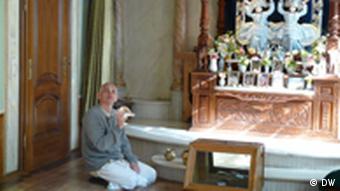 The five permanent members of the temple then go about their normal activities in the home. Such as cleaning or kitchen work. Some also work outside the center. Keshava, for example, works in the promotion department of a manufacturer of organic products. All Hare Krishna followers are vegetarians. They assume that slaughtering an animal and consuming that meat also leads to violence. The plant-based meals cooked in the Gauradesh Temple kitchen are popular outside as well. The temple operates a catering for private kindergartens in Cologne. The association is financed through this income, membership fees and donations.

From Islam to the Hare Krishna religion 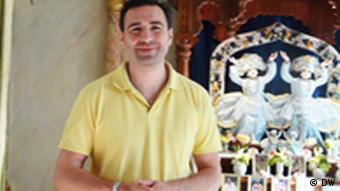 The 36-year-old Kemal Ajlan, aka Keshava, has Turkish roots and was born a Muslim. At the age of 21 he got his first impressions of the Hare Krishna philosophy through a book. He became completely convinced of the teaching in 1996 at the Ratha Yatra Festival in Berlin. He was particularly fascinated by the mercy that emanated from the main Indian god Vishnu. He liked that this god had a personality and was also represented in pictures. However, his parents were initially unable to accept their son's new religion. His mother was particularly bothered by the fact that there are images of God, in the case of Vishnu. In Islam this is blasphemy.

In the meantime the waves have calmed down and Keshava's mother even sees parallels to Islam in the Hare Krishna religion. Because many of the laws are similar. For example, the prohibition of certain stimulants - such as alcohol, drugs or even gambling. Also that God is omnipotent and one should lead a godly life is a parallel.

Today there are over 300 Krishna Consciousness Society centers around the world. In Germany, however, there are no more followers than in the 1960s or 1970s, because many people saw - and still see - a sect in the movement. Some of the reasons were the long repetitions of the mantras, which were supposed to be mind altering. In the meantime, however, these claims have been refuted. The image of Hare Krishna followers also suffered from reports of sexual assault in the 1960s and 1970s. 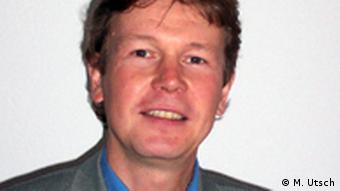 "However, the movement has reformed and is no longer referred to as a sect," says Michael Utsch from the Evangelical Central Office for Worldview Issues in Berlin. Nevertheless, he is skeptical that the Hare Krishnas are getting more and more popular in western countries and says: "The idea of ​​developing a Krishna consciousness through certain meditation techniques may be a life goal for certain chosen ones Society is viewed - I think it's utopian. "

Members of all faiths are always welcome in the ISKCON Association Cologne. An interreligious dialogue is being sought here. In addition to preaching activities at schools and universities, ISKCON works with various universities. The University of Wales in Lampeter even offers the Vaishnava Theology course, a major branch of Hinduism, together with the association. The main goal of the Hare Krishna followers in Cologne is to be a good point of contact through their temple for those who are looking for an established source for more spirituality.