Hindi spoken in the city of Mangalore

Tulu(tuḷu) is a Dravidian language in southwest India, spoken by around 1.7 million people in the coastal area of ​​the states of Karnataka and Kerala as their mother tongue. Many native speakers are bilingual with Kannada. Tulu is usually counted as part of the South Dravidian subgroup, some researchers also add it to the South-Central Dravidian group. 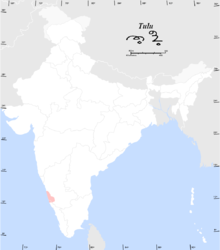 Spread of the Tulu

That also as Tulu Nadu or Tulunad ("Tulu-Land") designated Tulu-language area comprises a coastal strip in southwest India around the city of Mangalore. It belongs for the most part to the state of Karnataka, to a smaller part to Kerala and includes the southern part of the Udupi district, the Dakshina Kannada district and the northern part of the Kasaragod district. The northern border is marked by the Suvarna river, the southern by the Chandragiri river, and in the east the Tulu-speaking area is bounded by the mountains of the Western Ghats. Speakers of numerous languages ​​live in the Tulu Nadu region (Tulu, Kannada, Konkani, Marathi, Malayalam, Koraga), but all of them use Tulu as the lingua franca for informal and Kannada for formal matters.

In the 2001 Indian census, around 1.7 million people gave Tulu as their mother tongue. 1.5 million of them live in the state of Karnataka.[1]

Although Tulu was probably one of the first individual languages ​​to split off from the original South Dravidian language, the earliest language monument is an inscription from the 15th century. Two epic poems were written in the 17th century, Srī Bāgavato and Kāvēri. Therefore, almost nothing is known about the development of the language up to the 15th century. Even in the centuries that followed, there was only a weak literary tradition.

Tulu was revived in the first half of the 19th century by German missionaries. They printed Tulu literature and Christian texts (translation of the Bible in 1872), but they used the Kannada script, which pushed back the Tulu script, which was already rarely used at that time. As a result, the old font was almost completely out of use by 1900.

The British orientalist Robert Caldwell took part in his major work A Comparative Grammar of Dravidian or South Indian Family of Languages from 1856 was the first to propose a systematic, linguistic study of the Tulu. Another grammar was created in 1872 by a British linguist. In the 20th century, S. U. Panniyadi and L. V. Ramaswamy Iyer studied the grammar of Tulu in detail. They also put forward the controversial theory that Tulu was older than the other major South Dravidian languages, Kannada, Tamil, and Malayalam. Tulu literature experienced a renaissance in the 1970s. Since then, numerous novels, poetry collections, short stories and dramas have been published on Tulu.

The Tulu phoneme inventory has 14 vowels, seven short and seven long. The vowels ɛ and ɯ, which are unknown to most of the other Dravidian languages, are striking. They only appear in certain positions, but there they contrast with e and u, cf. batte "He came" with battɛ "I came" and pattu "It will catch" with pattɯ “Catch!”.

There are 21 consonant phonemes in the Tulu. The plosives come in rows of five (labial, dental, retroflex, palatal and velar) each in a voiceless and voiced variant. In some dialects the retroflex lateral ḷ occurs, in others, however, s and ś coincide with c. Consonant clusters at the beginning of a word are rare and occur mainly in Sanskrit loanwords.

The plural suffix is -rɯ, -allu or -kulu. The Tulu knows eight cases: nominative, accusative, dative, ablative, two locatives, sociative and genitive. The nominative is unmarked, the other cases are expressed by suffixes that are added to the verb stem in the singular and to the plural suffix in the plural. The case suffixes have allophones that occur under certain circumstances. Some tribes go through changes when they adopt suffixes so will kudka "Fuchs" in the accusative to kudke-nɯ.

In addition, there is a vocative which is formed by changing the stem-ending vowel, e.g. B. bāve > bāvā "Brother in law!". More specific facts are expressed through postpositions, which mostly govern the genitive, e.g. B. good-da mittɯ "on the hill".

The personal pronouns are inflected irregularly: yānɯ “I” takes the Obliquus stem before case suffixes en- at. There is an inclusive and exclusive pronoun for "we": eṅkulu "We (without you)" and nama "We (with you)". This distinction does not exist with the verb forms. The personal pronouns of the second person are ī (Obliquus ni-) "you and nuwgulu "you". In the third person, a distinction is made between masculine, feminine and neuter as well as proximal and distal deixis, e.g. B. imbe / umbe "(This) he", āye "(That) he". In the case of personal pronouns (also in the third person), a politeness form through the suffix -rɯ educated: īrɯ "You", ārɯ "He (respectfully)".

Tulu was previously written in a separate script similar to that of Malayalam, which is now only used by Brahmins for religious texts. Otherwise, today one uses exclusively the Kannada script, which was fixed in its present form by Christian missionaries in the 19th century, although not all Tulu sounds can be reproduced in this script.

The Netravati River divides the Tulu-speaking area into a northern and a southern dialect area. Altogether there are five spatially separated dialects of the Tulu. The south-western dialect spoken in the Kasaragod district of Kerala is influenced by the Malayalam, while the other dialects common in Karnataka mainly have influences from the Kannada.

In addition, Tulu has various sociolects. For example, the linguistic form of the Brahmin upper class is distinguished by a particularly high number of loan words from Sanskrit, which are often even pronounced with aspirated consonants, which actually do not exist in Tulu.