What is the color of the Australian flag

mobile view, to the English Version tap the flag

• Meaning / origin of the flag

• Meaning / origin of the coat of arms

• Origin of the country name

National flag and jack,
Aspect ratio = 1: 2,
Source, according to: Flags of the World

Trade flag,
Aspect ratio = 1: 2,
Source, according to: Flags of the World

Naval flag,
Aspect ratio = 1: 2,
Source, according to: Flags of the World

Flag of the air force,
Aspect ratio = 1: 2,
Source, according to: Flags of the World

Flag of civil aviation,
Aspect ratio = 1: 2,
Source, according to: Flags of the World

Flag of customs,
Aspect ratio = 1: 2,
Source, according to: Wipkipedia (D)

Flag of the naval office,
Aspect ratio = 1: 2,
Source, according to: Wipkipedia (EN)

Flag of the queen,
Aspect ratio = 5: 7,
Source, according to: Wipkipedia (EN)

Flag of the governor general,
Aspect ratio = 1: 2,
Source, according to: Wipkipedia (EN)

until 1901,
Federation Movement Flag,
Aspect ratio = 1: 2,
Source, according to: The world of flags

Aboriginal flag,
Aspect ratio = 1: 2,
Source, according to: Wipkipedia (EN), The World of Flags

The flag of the 150,000 native inhabitants of Australia (Aboriginals) is now very well known internationally. It is a design by Aboriginal Harold Thoms and was first hoisted in 1971. Black stands for the people, red for the country, and the yellow disk for the sun.

Source: The World of Flags

Meaning / origin of the flag

Australia uses the British Ensign system, which means single-color flag cloths with a flag display - the British Union Jack - in the upper corner. The color of the basic cloth of the flag is determined by its use. In any case, the Union Jack points to the links with Great Britain. Britain had introduced a flag system in 1864 in which:

When a common flag was sought for the United Colonies of Australia, since the flag of the Federation movement was apparently not intended to be used for it, a competition was held in 1901, from which the design of today's Australian flag emerged as the winner. It shows a seven-pointed white star under the "Union Jack". It was added in 1909 as a six-pointed star, and symbolizes the states and territories. In the flying end of the flag is the "Southern Cross", a symbol that is widespread in the Pacific region and consists of one five-pointed and four seven-pointed white stars. In its current form, the flag was introduced on May 22nd, 1909 and confirmed on April 15th, 1954.

The flag of the queen is derived from the coat of arms of Australia. Your local representative is the Governor General of Australia. As decided in the Westminster Statute of 1931 for all Dominions, its flag is solid blue with the royal crest in the middle. Underneath the name of the Dominion, very often, as in Australia, within a tape.

The change of the flag is discussed again and again in Australia, and various unofficial flags are circulating in the country. The background is the rejection of British symbolism, which is perceived as outdated or un-Australian. The most famous of the meanwhile three unofficial flags, the "Boxing Kangaroo", is shown very often by Australians. Originally it is a joke flag in the Australian national colors green and yellow, possibly derived from the acacia leaves of the coat of arms. The second unofficial flag that is particularly popular with intellectuals is the "Eureka flag". During a miners' uprising on November 29, 1854, an independent republic was proclaimed in the town of Eureka Stockade. Before the police and army put down the uprising, a blue flag with a white cross in the center and five white eight-pointed stars at the end of the arms of the cross and in its center flew here. The blue symbolized the sky, which belongs to all inhabitants of this planet, hope and freedom. The third unofficial flag is the "flag out". It was created on the occasion of the 200 year celebrations in 1988 by the excursion organization. It represents a compromise between the elimination of the British symbolism and the retention of the previous colors.

Source: The world of flags, flags and coats of arms, flags coat of arms hymns 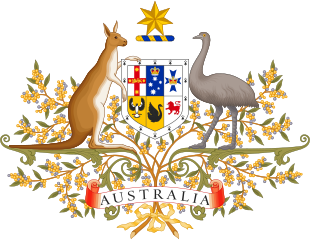 Meaning / origin of the coat of arms

The national coat of arms was awarded to Australia on September 20th, 1912 by the British King George I. The divided and halved shield shows the emblems (badges) of the individual states: on a silver background a red George cross with a golden striding lion and four golden eight-pointed stars (New South Wales), on a blue background five silver stars, above the British crown (Victoria), on a silver background a blue paw cross with the British crown in the middle (Queensland), on a gold background an Australian strangler (South Australia), on a gold background a black swimming swan (Western Australia) and on a silver background a red striding lion (Tasmania). The shield shows an ermine border. It stands for the indivisibility of the state. Shield holders are kangaroo and emu. Above the shield is the Commonwealth Star, a gold seven-pointed star on a gold-blue bead. Acacia branches with leaves and fruits surround the coat of arms. A silver ribbon shows the name of the state.

Source: The world of flags, flags and coats of arms, flags coat of arms hymns 1933 · Referendum for an independent Western Australia

Origin of the country name

From antiquity to the Middle Ages, a suspected and repeatedly mentioned and mapped southern continent was called "Terra Australis" or "Terra australis incognita". From the 16th and 17th centuries, seafarers kept looking for this continent. In 1606 Pedro Fernández de Quirós discovered the New Hebrides (now Vanuatu) and he named a land mass (the island of Espiritu Santo) that seemed very large to him "La Austrialia del Espiritu Santo". Today's Australia was discovered by Dutch sailors and repeatedly visited (1606 Willem Jansz → Cape York Peninsula, 1616 Dirk Hartog → West Coast, 1619 Frederick de Houtman → West Coast, 1696 Willem de Vlamingh → West Coast). An expedition of the Dutch East India Company (VOC) led the navigator Abel Tasman past Antarctica in the south and he discovered a large island which he called "New Holland". This name was carried over to the entire, slowly peeling land mass of the "Terra incognita", the Australian subcontinent. Since the coasts of New Holland mostly only dealt with deserts, there was initially no economic interest. The British captain James Cook reached the fertile east coast in 1770, which he took possession of for Great Britain as "New South Wales". In the years that followed, various British colonies were founded on the continent, e.g. Van Diemen’s Land (1825), South Australia (1836) etc., which was the first time the word "Australia" appeared in a country name. These six British colonies merged in 1901 in the Commonwealth of Australia. Ultimately, the island of "New Holland" was renamed "Tasmania" by the British in 1824 in honor of its European explorer Abel Tasman.