Virtual reality can be dangerous

In the technical field and in the entertainment industry, VR applications are now almost standard. But the headsets lead to health impairments - especially when used for long periods of time, researchers report. 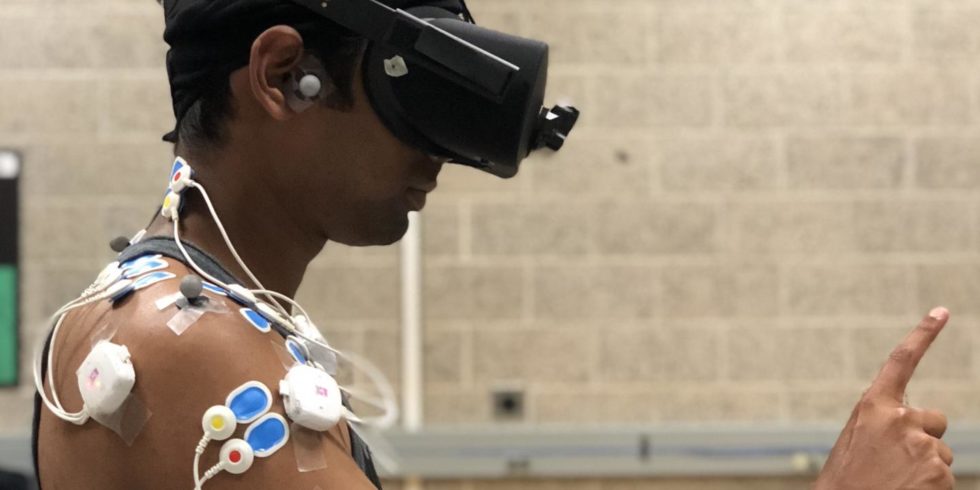 What are the health consequences of typical VR movements? A study participant is measured in the laboratory using sensors.

Stiff shoulders, headaches or pinched nerves in the form of the so-called carpal tunnel syndrome - users are familiar with these symptoms when they sit in front of their computer for a long time. But what happens when you move away from the desktop and step into virtual reality?

A recent study from Oregon State University, Corvallis looked at how typical movements of VR applications can affect health. The aim of the scientists is to make users of this fast-growing technology more secure. Because VR is used more and more often - not only in games, but also in the education and training of engineers.

Background: Virtual Reality users wear a headset and perform 3-dimensional movements all over their bodies - in contrast to people who work on normal computers.

With sensors attached to the participants' joints and muscles, researchers recorded typical movement sequences in VR users. They also worked with electromyography. Here movements of the eyes are recorded.

An Oculus Rift VR headset was used in the study. Scientists asked participants to either point to specific points around a circle or to mark a particular area with their fingers. This experiment was repeated with various parameters, with researchers placing visual elements at eye level, 15 degrees above eye level, and 15 and 30 degrees below eye level, respectively.

Stress on the musculoskeletal system

Regarding the results: Regardless of the angle, stretching the arm straight out caused shoulder discomfort in just 3 minutes. With prolonged use, as is quite the case with VR applications, this can lead to major health problems such as "gorilla arm syndrome" - a touchscreen equivalent of carpal tunnel syndrome. According to the New Hackers Dictionary, "the arm feels sore, cramped, and oversized".

Injuries to the rotator cuff, a muscle group in the shoulder joint, are also to be feared in the long term. In addition, the heavy VR headset can increase the pressure on the cervical spine. The neck is strained and there is a risk of pain.

Another goal of the researchers was to give application or game developers hints on the placement of VR objects. To do this, the experts concentrated on neck and shoulder movements. They found that the exposure was greatest when participants had to tilt their heads 15 and 30 degrees. The most extreme postures and the highest muscle activity were observed in VR objects located 15 degrees above eye level, as users were forced to constantly stretch their necks and raise their arms. Unsurprisingly, this also led to the greatest discomfort.

"Based on this study, we recommend that objects that you interact with more often should be closer to your body," said Jay Kim of Oregon State University. "These should be at eye level and not above or below."

Kim's main goal is to avoid the mistakes of the past. When personal computers emerged in the 1980s and 1990s, it was often too late to think about the risks of overuse, explains Kim. That should not be repeated in the form.

Tech analysts estimate that around 168 million people around the world will be equipped with some form of VR by 2023. A large proportion of its users are gamers, but the practical uses of VR extend to healthcare, the military, and the education and training of engineers. In mining, for example, trainees use VR to practice new skills that would be dangerous on site.

“There are currently no standards or guidelines for the interaction of the human body with virtual and augmented reality,” criticizes Kim. It is all the more important to understand how various parameters of the spatial arrangement can be changed in order to minimize health risks. This also includes introducing time limits. For some people, long-term use leads to orthopedic problems as well as VR disease (Virtual Reality Sickness) with nausea, headaches and tiredness. This is due to contradicting sensory stimuli: our eyes report a movement to the brain, but the organs of equilibrium perceive nothing.