1. Ayodhya, (Sanskrit: अयोध्या Ayodhyā f.) literally: "the invincible", city into which no enemy can penetrate, unshakable fortress. (1) Indian pilgrimage site, with Rama temple and Rama sanctuary, is considered the birthplace of Rama. Ayodhya is 10 kilometers from Faizabad Railway Station. There is also a train station in Ayodhya. Ayodhya is located in Uttar Pradesh. It is the holiest place for pilgrimages. It is located on the Sarayu River.

Janmasthan, the place where God Rama was born, is a significant place. There was a beautiful temple there, which was destroyed by Babur in 1520 and replaced by a mosque. Another significant place of worship is Hanuman Garh (or Gadi). There is a very large cave of the god Hanuman there. There is another sacred temple there, the Kanak Bhavan (House of Gold). The gold crowns of god Ramas and the goddess Sita are exhibited there. Mani Parbat in Ayodhya is a holy place for Buddhists. There the Buddha taught his principles.

2. Ayodhya, In the epic Ramayana it is considered the capital of the kingdom of Rama.

3. Ayodhya, (Sanskrit अयोध्या a-yodhyā f.) Name of the capital of the kings of the solar family, i.e. also Rāmas, on the bank of the Śarayū River in northern India.

Transcription of a lecture video (2014) by Sukadev on Ayodhya

Ayodhya means invincible, invincible. It is the name of a capital, the capital of the kingdom of Rama, Ayodhya, the mythological city of the Ramayana. Ayodhya is the city where Dasharatha, the father of Rama lived and ruled. Rama grew up in Ayodhya. Ayodhya was the capital of the kingdom. Ayodhya, from this capital Rama had to go into exile at some point. At first he was the student of Vishwamitra for a few years, later he also learned from Vasishta, then he went back to the capital to Ayodhya and then he was to be crowned king in Ayodhya.

Then there was some riot in the city, his stepmother didn't want that, and so Rama went into exile for a few years. At some point Rama returned with Sita and established Ramaraja, the rule of Rama, in Ayodhya, an example of a just rule, a good rule, a rule where the people had it well. Ayodhya, as a mythological city, in which the ideal human society was exemplified, has come under the rule of Rama's government in the last few years. Ayodhya is considered invincible, invincible, which is also what it means if you strive for the right path, if you really care about doing the good, then do it so strongly that it is invincible, invincible.

Ayodhya is located on the right side of the Sarayu River, 6 km from Faizabad. The city is closely connected to Rama, the eighth incarnation of Vishnu. According to the Ramayana, the city is 9,000 years old and was founded by Manu, the progenitor of mankind and legislator of Hindu culture. Other sources write that the founding goes back to King Ayudh. For centuries Ayodhya was the capital of the solar dynasty from which Rama emerged as king. At that time Ayodhya was called Kaushaldesa.

The SkandaPurana and other Puranas call Ayodhya the holiest city in India, as it is the scene of a number of Hindu writings. Today the city with its many temples is a center of the highest historical and religious importance. The Atharvaveda describes Ayodhya as a city built by the gods, blooming like paradise itself.

Ayodhya's first ruler was Ikshvaku, from the Sun Dynasty (Suryavamsha) and the eldest son of Vaivasvata Manu. The name of the sixth king of this dynasty was Prithu, he gave the earth 'Prithivi' its name. Mandhatri was a later king. The 31st king of this line was Harishchandra, known for his truthfulness (SathyaSandhata). He too came from the Suryavamsha, which was known for the honesty of its rulers. King Sagar from the same dynasty performed an Ashvamedha (horse) sacrifice. In mythology, his great-grandson, Bhagiratha, brought the river Ganges to earth through strict asceticism. Then came the famous King Raghu, after whom the Raghuvamsha dynasty is named. His grandson was King Dasharatha of the Kosala Dynasty, the father of Rama.

Ayodhya is a place of worship of God. Different religions have their origin here, some have grown at the same time, some have developed into different epochs. Hinduism, Buddhism, Jainism and Islam can be found in the city. Five tirthankaras of Jainism are born here: the first Adinath, the second Ajitnath, the fourth, Abhinandannath, the fifth Sumatinath, and the fourteenth Anantnath.

Ayodhya lives the Ganga-Yamuna culture in the Hanumangarhi Temple, which was built by the regent Nawab from Awadh. The Rama Temple Sundar Bhavan had a devoted overseer, Munne Mian served the temple for over fifty years until his death in 2004. After the Jain Agamas, Ayodhya is the second eternal city after Shikharji. In no epoch will it ever pass or change.

King Ayudh is seen as the ancestor of Rama in the Hindu scriptures. Its name comes from the Sanskrit root 'yudh', 'fight' or 'wage war'. It is translated as 'not to be fought' or 'invincible'. During the time of Gautama Buddha, the city was called Ayojjha in Pali, Ayodhya in Sanskrit. In some writings it is stated that the city was situated on the Ganges.

In the first century CE, Ayodhya was called Saketa. Saketa was conquered around 127 AD by the Kushan / Yuezhi emperor Kanishka. He made it an administrative center of its eastern territories. The name reappears in Faxian, a Chinese monk in the early 5th century. It is not known when the name was changed, but it was known as Ayodhya at the time of the pilgrimage of the Chinese monk Yuanzang, around 636 AD.

Under the rule of the Mughals, Ayodhya was the seat of the regent Awadh. During the British rule, the city was called Ajodhya or Ajodhia and was part of the United Provinces of Agra and Oudh. It was also the seat of government of the small state of Talukdari. The cities of Ayutthaya in Thailand and Yogyakarta in Indonesia are named after Ayodhya.

Ayodhya is one of the oldest cities in Hindu culture. In the Ramayana it is written that it covered an area of ​​250 km² and was the capital of the Kingdom of Kosala. Ayodhya is located on the Ganges, a river that purifies all bad sins, and on the Ghagra. The ruler was Ikshvaku from the Sun Dynasty (Suryavamsha). The city was the seat of government of Dasharatha, the 63rd monarch of the Sun Dynasty. His son was Rama, an avatar of Vishnu. The Atharvaveda describes Ayodhya as 'a city built by the gods, blooming like heaven itself'.

Valmiki began to write the Ramayana in Ayodhya. The introductory chapters describe the splendor of the city, the glory of the regents, and the courage, prosperity and loyalty of the population. In a retelling of the Ramayana by Kamban or Tulsidas, the Ramcharitmanas, the city is also extolled. Some Tamil Alvars (Tamil worshipers of Vishnu) mention the city. It is the birthplace of Jadabharata, the first Chakravartin (world ruler), Bahubali, Brahmi, Sundari, Padaliptasurisvarji, Harishchandra and Achalbharata.

Ayodhya has historical significance for the Jain community. Two thousand years ago two important tirthankaras were born here. The Jain Agamas also note the visit of Mahavira, the last tirthankara of Jainism. The city continues to be the birthplace of five tirthankaras, including the first, Rishabha, and the ninth Gandhara (disciple) of Mahavira.

The city is also important for Buddhism. During the Maurya Empire and the Gupta Dynasty, Buddhist temples, monuments and study centers were built here. Ayodhya flourished as a trading center under the Gupta Dynasty.

Ayodhya was a trading center as early as 600 BC. Historians associate the city with Saketa. Saketa was a center of Buddhism from the 5th century BC to the 5th century BC. It is believed that the Buddha visited the city more than once, but there is no written record of this. Faxian, a Chinese monk, mentions several Buddhist monasteries in the city.

Swaminarayan, the founder of the Hindu Swaminarayan community, lived in Ayodhya as a child and began his seven year journey through India as a 'Nilkanth' here.

Ayodhya, along with Varanasi and Dvaraka, is a Mokshdayani city or a 'land of spiritual blessings that grants liberation from the bonds of karma'. Hindu scriptures such as the Ramcharitmanas, the Vishnu Purana and the Shrimad Bhagavat Mahapurana recommend pilgrimages to this city as it increases the good and the virtues (Punya) and diminishes the bad and the iniquities (Papa).

Ayodhya is one of the seven holy sites of the Hindus in India, along with Varanasi the most sacred.

Here you can hear how the Sanskrit word Ayodhya, अयोध्या, Ayodhyā is pronounced:

Stories from the Ramayana 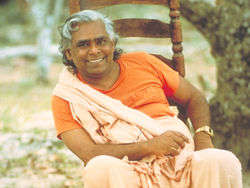 Swami Vishnu-devananda, one of the great yoga masters of the 20th century